More details and images will be published on the official release in June.

The GR Yaris Intake has been developed through extensive data logging of temperatures, flow rates and dyno testing. Since this is a turbocharged engine, heat and volume were the main considerations during development. This intake system has been developed to offer the highest possible flow rate whilst maintaining the lowest intake temperatures possible. Each component has been designed to provide the turbo with a smooth and free flowing path. By ensuring a sealed system we have improved on the IAT’s of the OEM airbox whilst at the same time increasing the internal volume to reduce the pressure drop and therefore reduce pumping losses of the turbo. In doing so the turbo is able to operate more efficiently and therefore reaches peak boost sooner to produce a net performance gain.

The filter itself has an outer diameter of 210mm or 8.3″ with a filtration surface area of over 130,000mm^2. The patented Venturi housing has been designed to provide the maximum internal volume possible for the GR Yaris and provides laminar flow to the turbo tube.

The GR Yaris Eventuri system uses our Patented Carbon fiber Housing which provides an aerodynamically efficient airflow path from the filter to the turbo. Not just another cone filter with a heat shield but a unique design which invokes the Venturi affect and maintains laminar flow conditions to reduce the drag on the turbo. You can read more about the housing design and how it works HERE.

Our GR Yaris intake has been tested by various reputable tuners globally who have all reported similar results. The first dyno chart is from RaceCal in the UK. Several runs were done with the OEM airbox to get a repeatable result and then again with the Eventuri intake. Tests were done on the same day back to back with the hood closed. Results show an increase in torque and power across the entire RPM range – not just at the peak RPM, which is why the car feels more responsive and is able to accelerate faster through the gears. The ambient temperatures during this session were 11.9 Deg C for the OEM airbox and 15.6 Deg C for the Eventuri – the rise in temperature was due to the dyno cell warming up after the stock airbox runs. 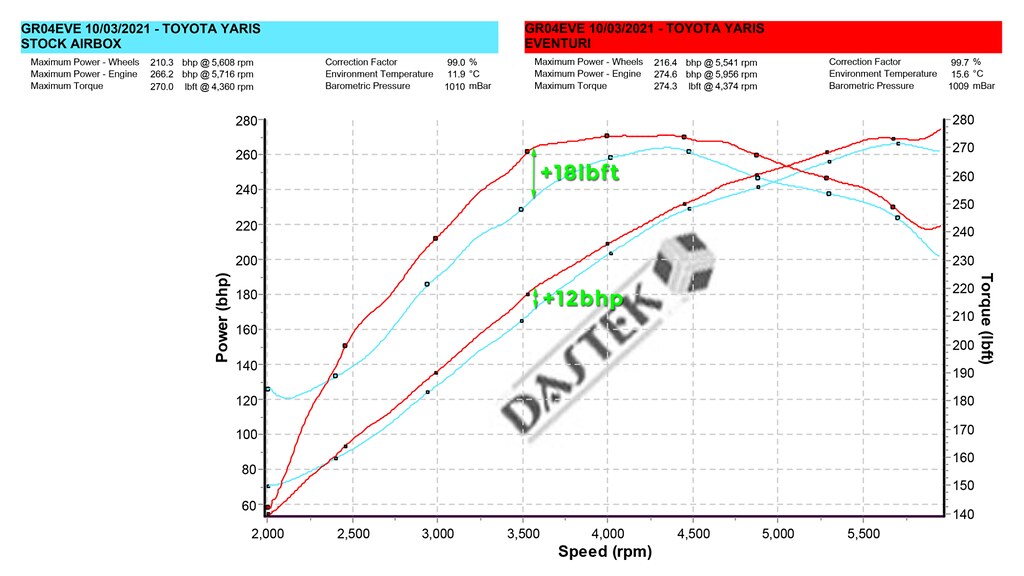 The second set of results are from Master Tuning Asia based in Hong Kong who tested the intake against the stock airbox on the same day and this time in warmer conditions of around 32 Deg C. The systems were tested 3 times and all 3 graphs show gains across the RPM range with the third run showing the highest gain as the stock airbox struggled with the IAT. 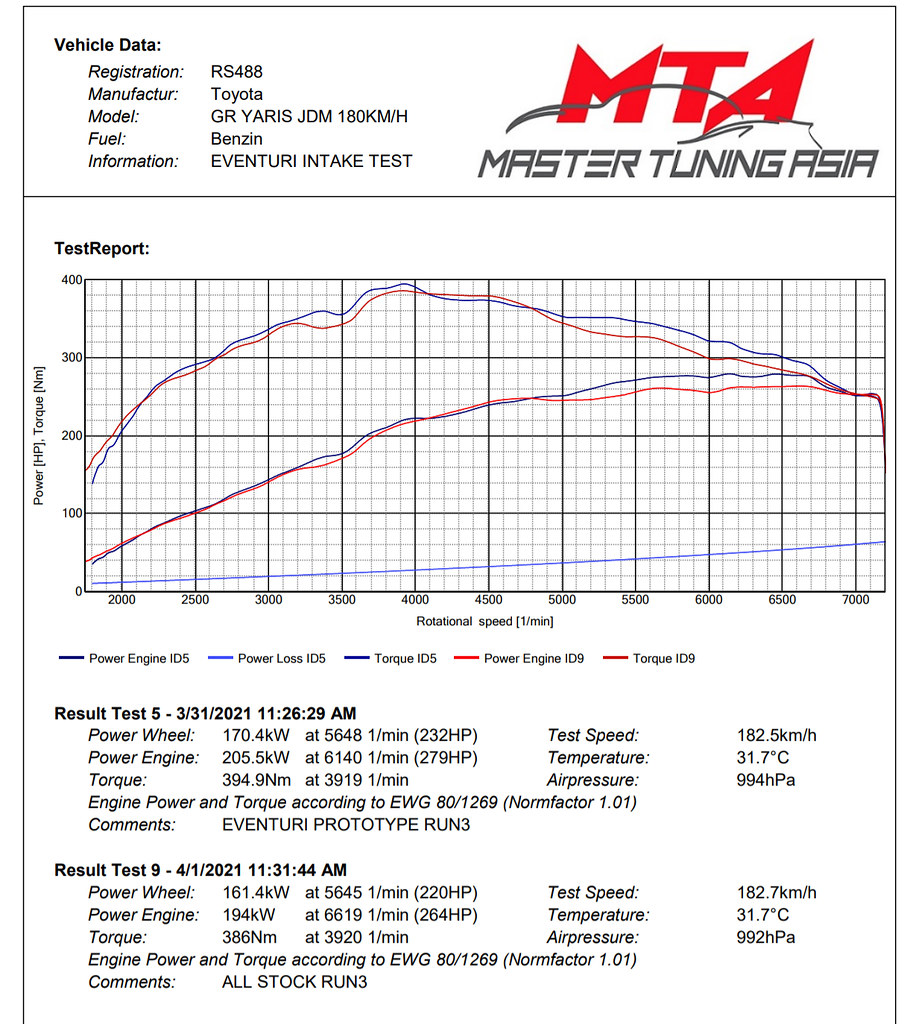 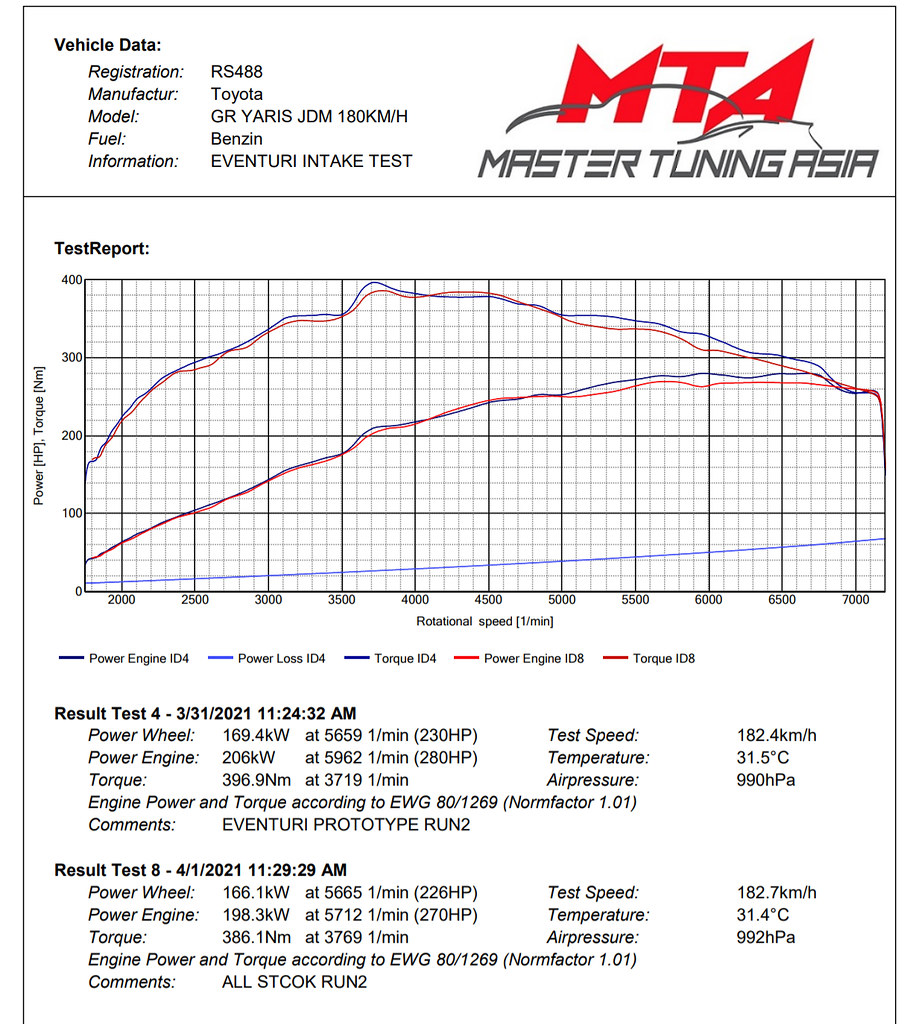 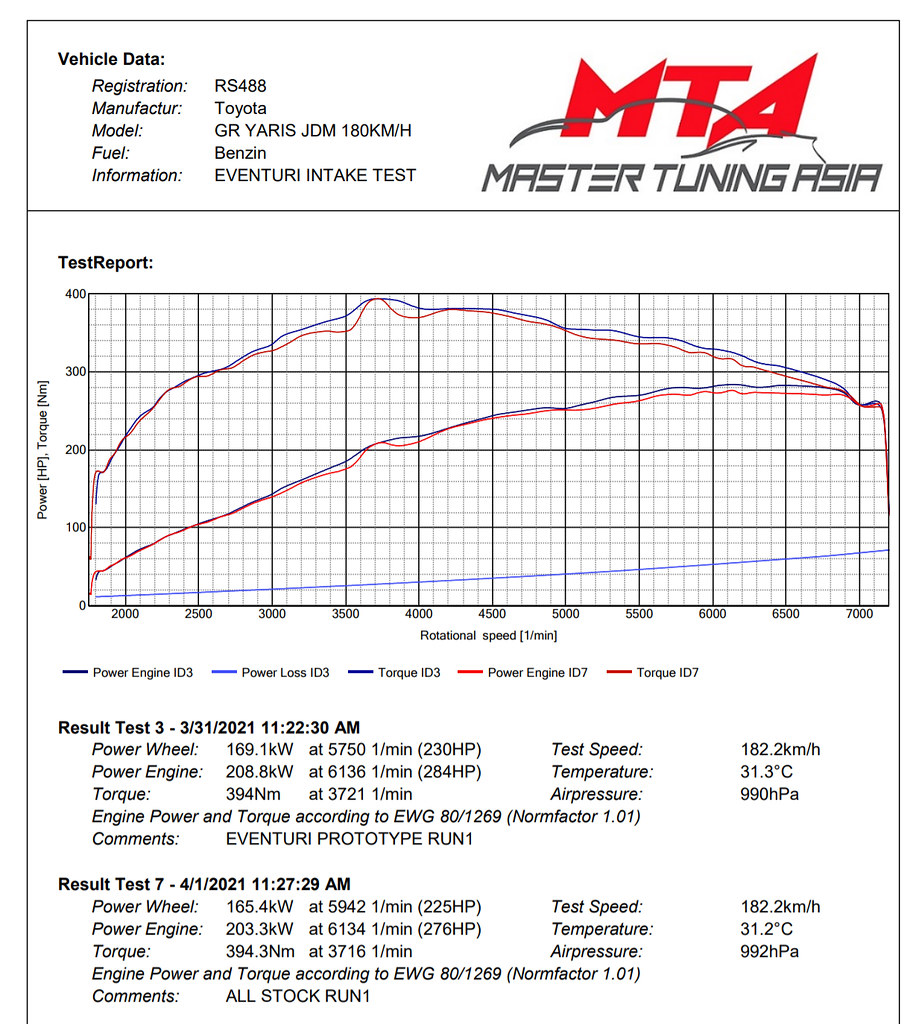 The Eventuri GR Yaris intake system consists of a number of components engineered to perform a specific purpose and fabricated to the highest of standards. We use 100% pre-preg carbon fiber with no fibreglass which means we can achieve a smooth internal surface to maintain smoother airflow. Here are the details for each component and the design ethos behind them:

Each intake system consists of:

Further details will be published on the official product launch in June.